The production of die castings can be affected by a number of factors, from machine to tooling to materials, resulting in different results of the products. In this guide, we are going to introduce what is die casting gate and tips for how to design the gate of the die casting mold. 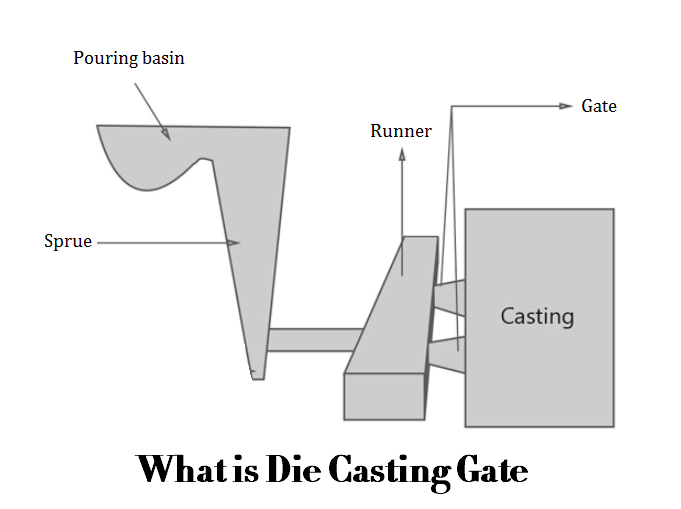 What is Die Casting Gate (Why Mold Gate is Important)?

The gate or inner gate is the final section of the gating system in die casting, which is directly connected with the mold cavity. The gate is used to change the low-speed liquid metal transported by the runner into the high-speed liquid metal, to make it flow in an ideal state and fill the cavity in sequence. The position, shape, and size of the gate can determine the velocity, flow direction, and flow pattern of the molten metal, which is directly related to the casting quality. A thin inner gate and a high flow rate of molten metal are favorable for filling thin-walled and complex shaped parts, and castings with clear shape can be obtained. But a too thin gate will make the metal liquid spray into the cavity and mix with the air quickly. The metal droplets will solidify quickly after contacting with the die casting mold cavity, forming pitting and bubbles on the surface of the casting parts, and will easily adhere to the cavity. With the increase of gate thickness, the inflow velocity of molten metal is relatively reduced, which is conducive to the elimination of gas in the mold cavity and the transmission of static pressure, resulting in dense crystal and low surface roughness. However, too thick gate will make the flow rate too low, prolong the filling time, reduce the temperature of molten metal, and form a hard skin on the contact surface between the gate and the cavity, resulting in unclear casting contour, and increasing difficulties in cutting off the gating system.

How to Design the Gate of Die Casting Mold?

1. The gate position should make the filling path less tortuous and avoid too many detours, so as to achieve the effect of less wrapping gas, less metal flow convergence, and less eddy current.

2. The gate position should make the distance of metal flow to all parts of the mold cavity as equal as possible so that the conditions of metal flow to the farthest parts of the mold cavity are the same, so as to stop filling and solidification at the parts of each division at the same time. For example, for the castings with uniform distribution, the center gate is the easiest to meet this requirement.

4. The gate position should make the temperature field distribution of the cavity meet the process requirements, so as to meet the filling conditions of metal flow to the farthest cavity.

5. Choose the place where the liquid metal flows into the cavity without vortex and exhausts smoothly; The gate position should be conducive to the elimination of gas in the mold cavity. In production practice, it is very difficult to eliminate all the gas, but it is a problem that should be considered in the design to eliminate more gas according to the shape of the casting.

6. For the frame casting, the gate position can be placed in the casting projection range. If a single gate can make the filling well, it is not necessary to use a multi-strand gate. When it is necessary to use multi-strand gate, the metal flow from each inner gate into the cavity should promote each other, instead of causing the face-to-face collision, resulting in energy dissipation and entrapment gas and other adverse consequences.

7. As far as possible, it should be taken at the position where the metal flow does not directly impact the core; The gate position should avoid the metal flow impinging on the core (or wall), because after impinging on the core, the energy dissipation is intense, and at the same time, it is easy to form dispersed droplets mixed with air so that the casting defects increase. After the core is eroded, there is die sticking, the eroded part forms a depression, which affects the casting demoulding, and sometimes even early hot cracking.

8. The gate should be set at the position where the casting is not easy to deform, and the tendency of shrinkage deformation should not be increased.

9. It should be set at the position where the gate is easy to be peeled off or punched after casting forming; The gate position should make the gate cutting, breaking and cleaning easy and not damage the casting.

10. For the castings with pressure resistance or no porosity, the inner gate should be set at the position where the liquid metal can maintain the pressure.

12. Whether the shape of the gate is fan-shaped, funnel-shaped or cone-shaped, it is very important to ensure that eddy current can not be generated when the molten metal passes through the runner. In die casting, several shapes of gate can be used alone or mixed, which can be used flexibly according to the actual needs.