Castability refers to the ability of metal materials to obtain qualified castings by casting. The casting performance of metal materials is mainly comprehensively evaluated by the fluidity, shrinkage characteristics and segregation tendency of metal during casting. 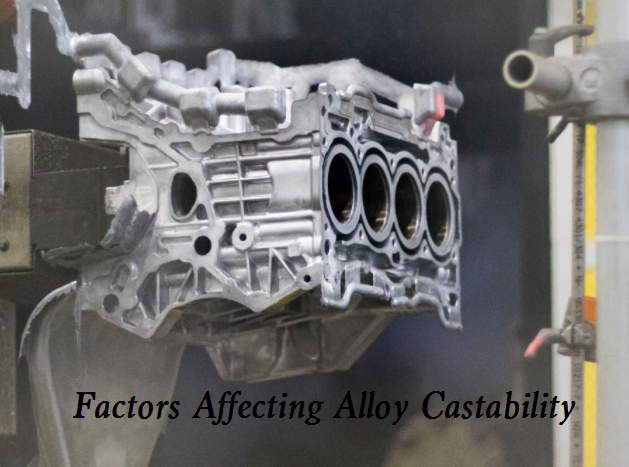 What is Castability - Most Important Factors Affecting Alloy Castability

The ability of liquid metal to fill the mold. The better the fluidity is, the easier it is to obtain castings with clear shape and thin wall, which are not easy to produce casting defects such as cold shut and insufficient pouring, and it is also more beneficial to prevent the production of other defects (such as shrinkage cavity, slag inclusion, porosity, etc.). When designing the structural shape and outline dimension of castings, especially when determining the wall thickness of castings, the fluidity of metal materials should be fully considered.

The main factor affecting the fluidity is the crystallization characteristics of the metal (solidification temperature range, primary crystal shape). Generally, the larger the solidification temperature range of the metal, the more likely the primary crystal is to be developed dendritic crystal, showing poor fluidity, and vice versa. For example, under the same mold and pouring conditions, the eutectic cast iron has the best fluidity, while the lower the carbon content, the wider the solidification temperature range, the developed primary austenite dendrites and the worse the fluidity. The chemical composition of the metal will affect the crystallization characteristics and physical properties of the metal, so the fluidity is also greatly affected. In addition, fluidity is also related to other process conditions in the casting process, such as pouring temperature and pouring pressure, thermal conductivity of the mold and complexity of the casting. When the metal composition has been determined, the fluidity can be improved by adjusting these process conditions.

Alloys with different chemical compositions show different shrinkage tendencies. For example, the volume shrinkage value of ordinary carbon steel is 10% ~ 14.5%, and the linear shrinkage rate is 2%. The volume shrinkage of gray cast iron is 5% ~ 8%, and the linear shrinkage is about 1%. Besides the chemical composition, the shrinkage characteristics of the alloy are mainly related to the structural shape of the casting, pouring temperature and pouring speed, cooling mode and other process conditions. Therefore, when choosing the alloy of the part, the designer should fully consider its shrinkage characteristics and give priority to the alloy with small shrinkage tendency. When designing the casting structure, it is also necessary to avoid using the structure of thick large section, local convex thickness or hot spot concentration, so as to reduce the occurrence of casting defects such as shrinkage cavity and porosity.

The shrinkage rate of castings can be determined according to parameters such as alloy type, composition, structural dimension of castings, etc.

The occurrence of segregation is mainly related to the chemical composition of the alloy. Alloys with different chemical compositions have different crystallization temperature ranges, and the wider the range, the easier it is to produce regional segregation. In addition, the tendency of segregation is also related to technological factors such as cooling and solidification speed and pressure during solidification. When determining the casting material, the designer should carefully consider the segregation characteristics of the material. If the alloy that is prone to segregation must be used, full attention should be paid to the design of casting section structure and the selection of casting method, and measures should be taken to reduce the occurrence of segregation.