What metals can be used for the casting process? Both ferrous and non-ferrous alloys are used. In this article, we’ll talk about the ferrous and nonferrous metals for casting, as well as their properties and feasibility in casting. 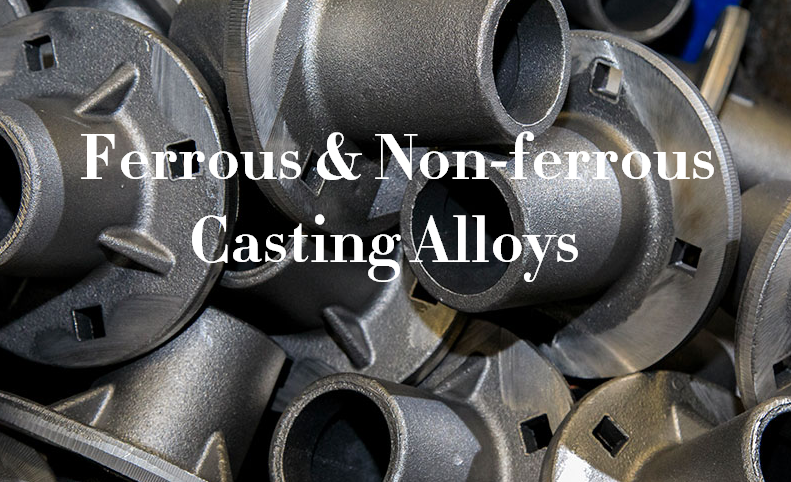 What Metals Can Be Used for Casting

Most commercial castings are made of alloys rather than pure metals, as alloys are generally easier to cast and the properties of the final metal casting parts are better. Alloys used for die casting and other metal casting processes can be divided into ferrous and nonferrous.

The most important casting alloy, it is produced by smelting iron-carbon alloys that have a carbon content higher than 2%. Its usefulness derives from its relatively low melting point. It also has good fluidity, castability, excellent machinability, resistance to deformation and wear resistance. Typical uses of cast iron are pipes, machines and automotive industry parts, such as cylinder heads, cylinder blocks and gearbox cases. Cast iron tends to be brittle, except for malleable cast irons. Typical pouring temperatures for cast iron are around 1400 ℃, depending on composition. Cast iron including the following types:

– Gray cast iron: has graphite flakes that deflect a passing crack and initiate countless new cracks as the material breaks.

– Nodular cast iron: also known as ductile cast iron, is a type of graphite-rich cast iron that has much more impact and fatigue resistance, due to its nodular graphite inclusions.

– White cast iron: has carbide impurities that allow cracks to pass straight through.

Cast iron and steel are both ferrous metals mainly composed of iron atoms, the carbon composition is the main distinction between them. Cast iron typically contains more than 2 percent carbon, while cast steel often contains between 0.1–0.5 percent carbon. And cast iron is relatively easier to cast than cast steel. The mechanical properties of steel make it an attractive engineering material, and the capability to create complex geometries makes casting an appealing process.

Advantages and characteristics of steel castings:

– Tensile strength is higher than most other casting metals, ranging upward from about 410 MPa.

– Better toughness than most other casting alloys.

– The properties of steel castings are isotropic, strength is virtually the same in all directions.

– Steel castings can be readily welded without significant loss of strength.

– Cast steel has great impact resistance and it is excellent at withstanding sudden impacts without bending, deforming and breaking.

Difficulties are found in steel casting:

– The melting point of steel is considerably higher than for most other metals that are commonly cast.

– The solidification range of low-carbon steels begins at about 1540 ℃。

– The pouring temperature required for steel is very high (1650℃).

– Due to high pouring temperature, steel readily oxidizes, so special procedures must be used during melting and pouring to isolate the molten metal from air.

– Molten steel has relatively poor fluidity, and this limits the design of thin sections in components cast out of steel.

Cast aluminum is created when aluminum is heated to extremely high temperatures, the molten aluminum is poured into a mold and cooled to form a shape that is exactly the same as the mold. Aluminum is one of the most common alloys used in metal casting. The properties of aluminum castings are attractive: light weight, a wide range of strength properties attainable through heat treatment, ease of machining, versatility, and affordability. In addition, the pouring temperatures for aluminum casting alloys are low compared to cast iron and steel. Cast aluminum is also a long-lasting material. Common applications of cast aluminum are cookware and furniture, but it’s also suitable in electronics, telecom, vehicles, and more industries.

Commonly used in die casting, have a low melting point and good fluidity, making it highly castable, the main shortcoming of casting zinc is low creep strength, so the zinc castings can’t be subjected to prolonged high stress.

Magnesium is the lightest of all casting metals, other properties including corrosion resistance, as well as high strength-to-weight and stiffness-to-weight ratios.

Include bronze (Cu-Sn), brass (Cu-Zn), and aluminum bronze. Copper castings can get good corrosion resistance, attractive appearance, good bearing properties, but the high cost of Cu is a limitation on the use of its alloys.

Easy to cast and have good corrosion resistance, but the mechanical strength is poor.

Good hot strength and corrosion resistance, which make them suited to high-temperature applications. But Ni alloys have a high melting point, which makes them not easy to cast.

Used for die casting. Corrosion-resistant and posses high strength-to-weight ratios. But the high melting point, low fluidity, and a tendency to oxidize at high temperatures also make the alloy not easy to cast.