Steel casting is a type of alloy casting that involves different steels. Cast steels have high design and manufacturing flexibility and can find extensive applications. To get steel castings of good quality, the following cast steel defects can’t be ignored. 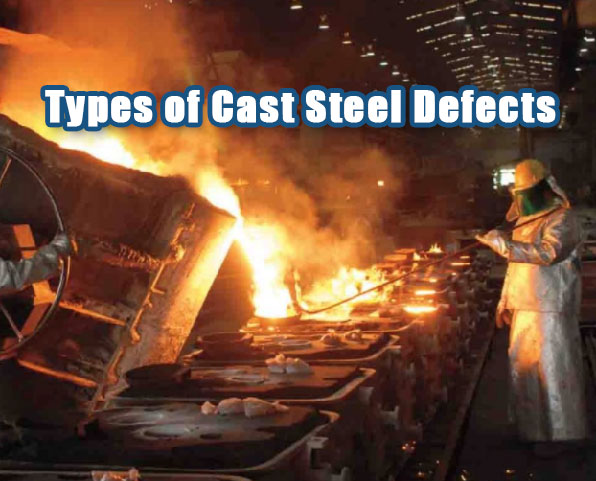 What are the common defects in casting steel? Are there some differences from casting aluminum/zinc?

Inside, on or near the surface of the casting, there are smooth holes of different sizes, round, long and irregular shapes, single or agglomerated. The color is white or with a layer of dark color, sometimes covered with a layer of oxide skin. Due to the different sources and causes of gas formation, the manifestations of pores are also different, including invasive pores, precipitation pores, and reactive pores. The volume of invasive pores is large and the shape is similar to a pear shape. They often appear in the upper part of the casting near the core wall or pouring position, which is mainly caused by the gas generated in the sand core invading into the metal and failing to escape. The position of the small end of pear-shaped pores indicates that the gas enters the casting from there. There are many scattered precipitated pores, which are generally located on the surface of castings. They often appear in almost all castings of the same furnace. The main reason is that many scattered small pores are formed in the castings because the gas absorbed by the metal in the melting process fails to precipitate completely before solidification. Reactive pores are pores caused by chemical reactions at the metal mold interface. They are also called subcutaneous pores because they are evenly distributed and often appear 1-3 è below the casting epidermis (sometimes under a layer of oxide skin). Because most of these pores are slender pinholes, and their long axis is perpendicular to the surface of the casting, they can also be called pinholes.

Sand inclusion refers to a layer of metal nodules or flakes on the surface of steel castings, and a layer of molding sand or coating is sandwiched between the metal nodules and castings. Scarring is due to a protruding scar where the metal liquid washes away a piece of sand locally on the mold surface or where stirring or boiling occurs, and the fallen sand is sandwiched in the scar or other parts of the casting. During pouring, the water on the surface of the wet mold cavity migrates to the interior of the sand mold due to the high-temperature baking of the liquid steel, forming a water condensation area with low strength, which is easy to delaminate the surface of the cavity and cause defects such as scab and sand inclusion of steel castings.

Cracks can be divided into cold cracks and hot cracks. A cold crack refers to the crack caused by the local casting stress of the casting is greater than the ultimate strength of the alloy when the casting is cooled to the elastic state after solidification; Hot crack is a crack caused by the obstruction of solid shrinkage of castings when the strength and plasticity of castings are still very low at the end of solidification or shortly after final solidification. White spots are micro-cracks caused by hydrogen precipitation and high structural stress and thermal stress during rapid cooling of alloy steel castings with high hardenability.

External cracks often appear in the hot joint at the junction of the two walls of the valve casting, such as the root of the flange and the convex surface of the outer wall of the valve body. The external crack can be found by the eye. The crack is relatively straight and perpendicular to the stress direction. It is a typical intergranular crack. Due to the early solidification of the casting surface, the crack develops from outside to inside. Therefore, it is generally difficult for the external crack to be repaired by self welding with feeding liquid metal.

An internal crack refers to the thermal crack formed inside the thick hot joint of the casting, which can be found during wave flaw detection or radiographic flaw detection, or pressure leakage.