Home > News > Difference Between Castings and Weldments – Casting vs Welding

A casting is a workpiece formed by pouring molten metal into a mold and cooling it. A weldment is a piece of work in which metal parts are welded together. What’s the difference between castings and weldments? Let’s take a look at a comparison between the characteristics of the cast and welded parts. 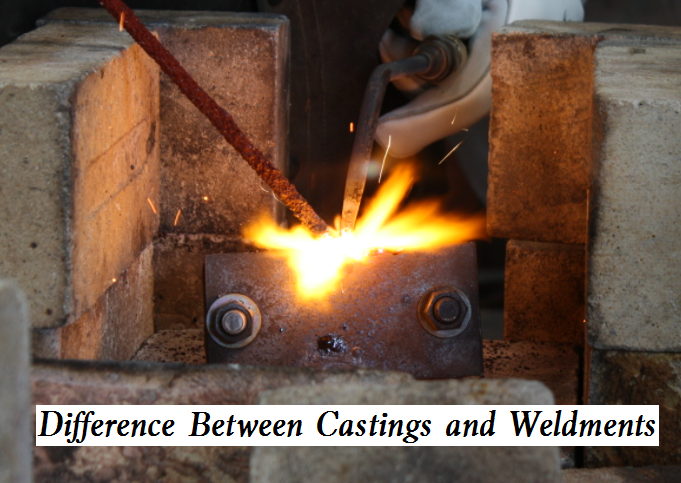 Difference Between Castings and Weldments

As a structural part of the machine tool, it often bears a large load. Take the beam of the gantry machining center as an example. The beam shall bear gravity, tension, torsion, etc. at the same time. In order to reduce deformation, the beam shall have good stiffness. The material used for welding parts is carbon steel, and its elastic modulus and mechanical properties are much better than that of cast iron used for castings. Under the same stress, we can make the cross-section of the beam smaller, because the span of the beam is large, so the weight reduced by reducing the section is considerable. The sag is also reduced, so the use of welding parts can ensure the rigidity of the machine tool as well as the static state of the machine tool’s geometric accuracy.

In the case of forced vibration, increasing the static stiffness of the object can reduce the amplitude of the object, and increase the natural frequency of the object, so as to reduce or avoid the occurrence of resonance. For self-excited vibration, improving the static stiffness can improve the limit of self-excited vibration stability. As the elastic modulus and mechanical properties of carbon steel materials are greater than that of cast iron materials, under the premise of the same stiffness, welding the weight of parts can be much lighter than that of castings (the weight of weldments with the same stiffness is only 60% of the weight of castings,

Generally speaking, the internal stress of iron castings is smaller than that of weldments, the stress will be smaller, and the deformation will be smaller during subsequent use, which is why the bed of the iron casting body, column, and other large parts can maintain good accuracy for a long time.

The casting is a more precise process and the overall chemical composition is evenly distributed. The process of obtaining metal castings with a predetermined shape, size, and performance also reduces processing time and costs. The manufactured welded workpiece is less precise than the casting and the mechanical properties of the joints are also changed. But it is more convenient and extensive than casting. Some special materials can not be welded effectively but can be made by casting, while casting is more suitable for manufacturing smaller workpieces.