CNC machining parts with anodizing surface treatment usually have good appearance and texture, even though its cost also increases. When it comes to the die casting process, can die cast aluminum be anodized? What factors cause success or failure? Follow us to learn about the die casting aluminum anodizing challenges and difficulties, find the solutions to improve the result. 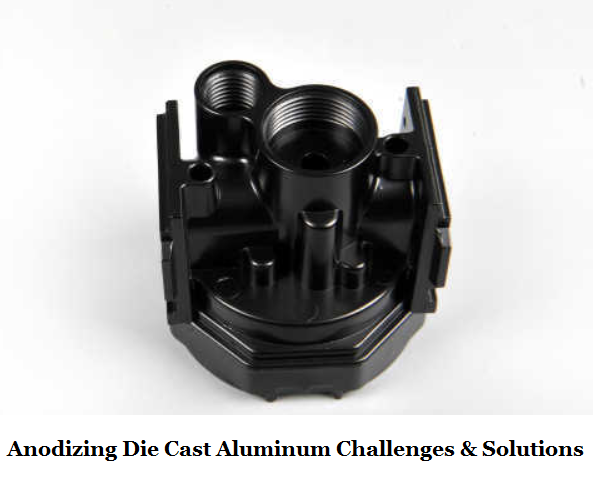 Can Die Cast Aluminum Be Anodized?

Why aluminum die casting parts are not suitable to be anodized? The main reasons are related to the composition of aluminum alloys and cost factors. Sulfuric acid anodizing has some limitations on aluminum alloy.

Anodizing is a process in which alloy parts are used as anode and stainless steel, chromium, or conductive electrolyte are used as the cathode in the proper electrolyte. Under certain voltage and current conditions, the anode is oxidized to obtain anodized film on the surface of workpiece. Sulfuric acid anodizing is required in the anodizing and coloring process. The quality of the anodized film will be decreased by the alloying elements. Under the same conditions, the anodized film on pure aluminum is the thickest and hardest, the corrosion resistance and the uniformity are also the best. To get the best oxidation effect on aluminum alloy material, the content of aluminum needs to be ensured, usually requires not less than 95%. In the alloy, copper will make the anodized film show red, damage the quality of electrolyte and increase the oxidation defects; silicon will make the film gray, especially when the content is more than 4.5%; because of its own characteristics, iron will exist in the form of black spots after anodizing. Die casting aluminum alloy and die casting parts generally contain high silicon content, so the anodized film will come in a dark color, it is impossible to obtain colorless and transparent oxide film. With the increase of silicon content, the color of the anodized film changes from light gray to dark gray to black-gray. Therefore, cast aluminum alloy is not suitable for anodizing.

The purpose of cast Al alloys are fluidity and ease of manufacturing, it’s not primarily for surface properties, if you want to achieve perfect surface finish, secondary processing is usually required. The fluidity of melt alloys are achieved through the addition of alloying elements, generally silicon, which does not anodize upon solidification. The chemistry and topography of the cast surface is complicated and not uniform, anodizing die casting aluminum alloys can’t be completed in a good form. In addition, a non-standard anodizing bath may cause the error and multiple trials, which will further lead to additional costs.

For Al Si Cu alloy, as the name implies, except for aluminum, silicon and copper are the main components, under normal circumstances, the content of silicon is between 6-12%, which mainly plays the role of improving the fluidity of alloy liquid; the copper content is only less than silicon, which mainly for increasing the strength and tensile force; the iron content is usually between 0.7% and 1.2%, within this proportion, the demoulding effect of the workpiece is the best. It is impossible to oxidize and color this kind of alloy, even if applies desilicification oxidation, it is difficult to achieve the ideal effect. In addition, it is difficult to form an oxide film on Al Si alloy or Al alloy with high copper content, and the film is dark, gray and poor gloss.

For Al Mg alloy, the anodized film is easy to form, the quality of the film is also better, it can be oxidized and colored, which is an important feature different from other alloys, however, there are still some shortcomings.

– It is difficult to achieve the best anti-corrosion effect because of its large pores and uneven distribution;

– Magnesium has the tendency of hardening and brittleness, reducing elongation and increasing hot cracking, such as adc5, adc6, etc. in production, because of its wide solidification range and large shrinkage tendency, shrinkage porosity and cracks often occur, and its casting performance is very poor. Therefore, it has great limitations in its application range, and the workpiece with slightly complex structure is not suitable for production.

– The aluminum magnesium alloy commonly used in the market, due to its complex composition and low aluminum purity, is difficult to produce transparent protective film during sulfuric acid anodizing, which is mostly milky white and has a poor coloring state, so it is difficult to achieve ideal effect according to the normal process.

Die casting services can achieve the structure, corner line and anodized quality which are difficult to get through forging and CNC machining. The quality of anodized parts is determined by a small change and detailed process control. It’s possible to ensure the anodizing quality of casting products through advanced flow channel technology, die casting process and post-processing method of the die, the key points are as below.

– Die runner, gate design, mold temperature control: Due to the characteristics of high aluminum content, poor fluidity and high working temperature, the runner and gate of the mould shall be set up according to the design principle of short range, the mold temperature machine shall be used to ensure the balance temperature of the die to overcome local supercooling and excessive flow marks.

– Selection of raw material: Choose raw materials with low impurity content, eliminate the pollution of silicon, copper, iron and zinc, it is necessary to use high-quality graphite crucible alone, and not to mix with other raw materials for production.

– Pretreatment of blank: After machining, the burr and oxide layer are removed by hand polishing or grinding according to product requirements.

– The selection of anodizing plant/factory: Before the anodizing process, the surface of castings should be cleaned, the conventional anodizing process can not meet the requirements, because there are different degrees of shrinkage cavity and stain in the bottom layer of die castings. Test and verify the suitable and professional manufacturers before mass production.